This camera has been updated or replaced.

Contact us as we may have rentals available. For new cameras contact us so that we can help you select the correct camera for your application. 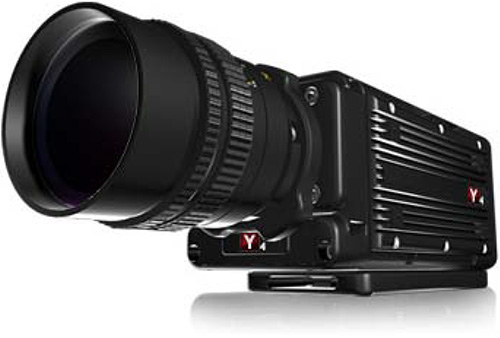 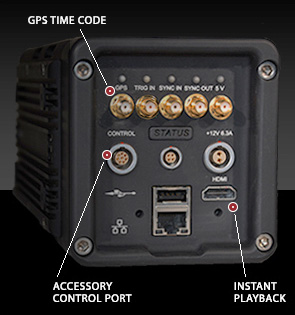 Rear of the camera

The Y Series Digital Cameras are fully featured design with HDMI independent out with all connectors on back of camera.

The design offers a high refresh rate during recording and playback through the digital HDMI-output. The use of composite materials and a smart mechanical design results in a shock resistant camera up to 100G. The optional battery pack offers the backup of the images in case of a power surge but also a autonomous use up to 60 minutes.

Mac and PC compatible with LabVIEW™ and MATLAB® plug-ins

Sensor I/O DA Hardware and control software add the capability to Sync High-Speed Images. Digital and Analog inputs can accommodate a variety of analog transducers, such as temperature, pressure and acceleration. Contact closures such as micro-switches, relays and analog threshold detectors are supported.

Enables record and capture of both controlled and intermittent events.

Analysis for engineers and researchers

MotionPro Y cameras come equipped with the latest high-speed gigabit ethernet (GigE) interface. Utilize ethernet hubs to separate the camera and the host computer by hundreds of meters or more, or network multiple cameras from a single host computer.

Also, simultaneously connect the GigE and USB2.0 interfaces for increased versatility. For example, connect a tablet PC through the USB2.0 interface for local setup, while operating the camera from a distance through a control PC connected via ethernet.

4 to 16GB on-board memory with fast and automatic downloading

Downloading the camera’s full 16GB memory is no longer limited by timing overheads associated with image compression and/or format conversions. Redlake’s MotionPro Y software contains a fast download option for quickly moving images to a temporary file in the host computer. The conversion process to the desired output begins in the background while the user is free to move on to the next acquisition. The automatic download option eliminates the need for repeated user intervention in order to download data. Simply command the software to download once and stop, or to repeat acquisition-capture N times prior to stopping.

Places zero restrictions on the location and size of the ROI

By utilizing an advanced XDR (eXtended Dynamic Range) mode of MotionPro Y3 and MotionPro Y4 and Y5 cameras, both dim and bright scenes can easily be acquired. While low light areas are boosted, saturated areas are minimized for effectively delivering better dynamic range.

Users can save the data either 8, 10 or more bits (when XDR is employed) per pixel to capture the maximum dynamic range.

MotionPro Y cameras can also be controlled wirelessly from a user’s PDA*. Simply leave a host computer (e.g., laptop) tethered to the camera, which will in turn establish a wireless connection to the PDA. Then use a stylus to control the camera’s operations.

MotionPro Y camera systems allow users to download movies from their cameras to a (video) iPod for others to share and review on the go, freeing them of cumbersome PCs and laptops.

MotionPro Y systems contains a special feature known as “Burst Record on Command” (BROC) in which the camera’s memory is segmented for capturing multiple image sequences (bursts) with an option to download all or selected sequences to the host computer.

MotionPro Y camera systems’ innovative Database Viewer located inside each camera’s software suite automatically saves images and movie files along with experiment controls. It also keeps track of any other external devices such as iPods, timing hubs and data acquisition systems, so users don’t have to keep track of settings. Users can also personalize each frame or the entire movie with their own comments/annotations.

MotionPro Y camera systems come equipped with LabView vis precisely for complex experimental setups at no additional cost. These vis rely on National Instruments IMAQ image capture and processing libraries. Note that the LabView interface is available only on PCs.

MotionPro Y camera designs provide Mac-based MotionPro X software. All camera controls (except gigabit ethernet interface) are available for both Macs and PCs. However, an OS X (10.3 or later) is required for Mac operation.

MotionPro Y cameras contain advanced triggering options, including a circular buffer capture that allows users to continuously record to the camera’s memory. When a software or hardware trigger arrives, it captures a pre-set number of frames into the memory before and after the trigger. Such data is invaluable in applications where pre-trigger status of the system under study helps prevent failures.